Hello everyone! Thanks for participating in last week's challenge. We loved how you EASE(L)'ed into Fall!!!

This week we're "Feeling Kind of Sketchy" and to Opus Gluei that means a sketch challenge. Be inspired by the sketch below and let's see where your creativity takes you! 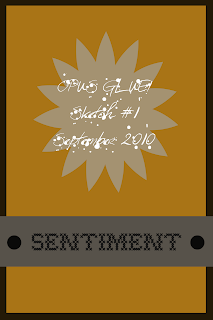 Feel free to use your imagination with the sketch.

Rosemary here and my project is a Halloween card on the gentle side.  I like that this has a vintage feel to it with the sweet witch image. (Stampin' Up's Greeting Card Kids set)
(other items used - DCWV Haunting paper, Mega circle punch, Copic markers, TwinkLets Diamond Dust glitter, buttons, thread, glue dots) 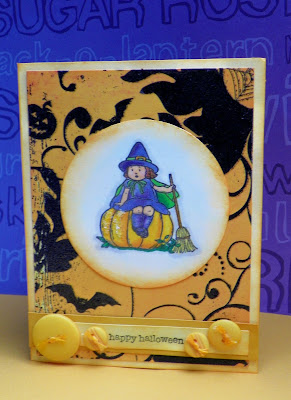 Jana here: When we here at OPUS GLUEI say to use your imagination with the sketch, we MEAN it. It's just how WE are, so, we have to extend our methods to you. You see, I had this wonderful mental image of the project I wanted to do with this sketch. What actually turned out, is only sorta close. You know how it is, you get going and things aren't quite how you imagined, so you make a little change. And then you have to make another change to accomodate for the other one, and so on and so on...... That's what happened here: 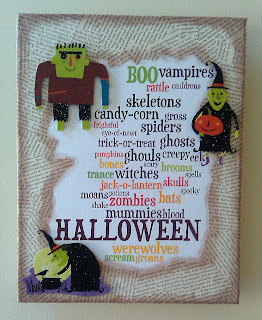 I had planned on using the HALLOWEEN as the sentiment and I had these cute little wooden pieces that were going on either end of the word. But they didn't fit. Physically or visually. So, they got tossed.

No little wooden pieces were harmed during the making of this canvas. I promise.)

If you tilt your head, and squint your eyes, and sort of cross them, you can see the sketch in here.

I have further details about how I did this on my blog HERE.

Please join us in this week's Sketch challenge.
And feel free to add the BLOG HOP to your blog.

Thank you for playing along.

Go by and visit all these wonderful artists. And make sure that you check out the rest of their blogs too. They will surely WOW you.

Let's make this an easy transition and EASE{L} into Autumn.
I love Fall. The colors are rich and comforting. The sweaters are warm and cozy. But most of all I love Fall for daylight savings time. It seems to make the transition SO much easier. An extra hour (or so it seems) to sleep in.

So for this challenge, we decided to EASE (L) into Fall.
(As ALWAYS we are VERY LIBERAL with the interpretaion of our challenges, so use your imaginations and show us what you come up with.)
*****
Jana here: I have a couple of these little canvas/easel sets. So I decided to make a little piece of happy art for my Studio. I used watercolor crayons for the sky and the ground. Even though I covered up most of the ground. I gave it a good coat of workable fixative, cuz at that point I wasn't sure where I was going with this piece. I pulled out a tin of leftover images and went to town with them. Then I placed the floral chipboard down. Stuck the "laugh" and "love" and the red diamond shape with glue dots. I used three layers of foam mounting tape for the sandpiper. Glue dots for the "be happy" and for the flowers under the shells. And that "red" sticky tape for the shells. 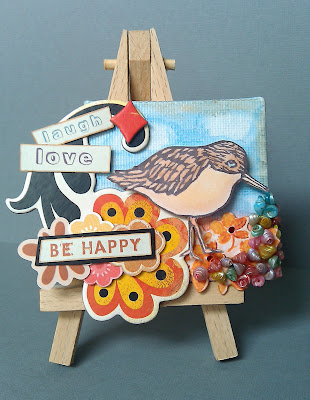 The components were things I had lying around. Even the sandpiper was leftover from another project. Chipboard pieces even had sticky on the backs already. I have a couple more shots of this little guy on my blog, here.

Rosemary here and here are my projects for this challenge. There are a bunch of great tutorials out on the Internet, so I recommend you do a quick search (if you need info on how to make an easel card) and take a look and be inspired by all that you find.

I used the same cardstock to form the base for both of my cards but then branched out and made a Halloween card and a Thanksgiving card. 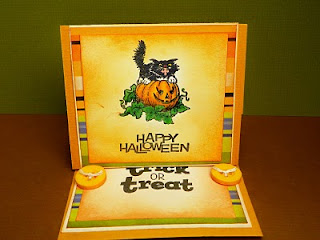 Here's the card as its intended when the recipient opens it, the buttons help to keep it standing straight. 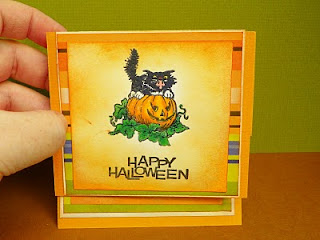 Here's the card held flat as it would be in the envelope.

My intention for my Thanksgiving cards is to make one for each person and use them as both a card and a placecard for Thanksgiving dinner.

Again, this is the open card

I used buttons as in the Halloween card but you can use just about anything (brad, eyelet, the mat around the bottom portion, whatever, endless possibilities). 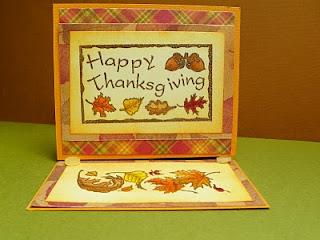 Here is the card from the side to give you an idea of the easel card construction that I used. 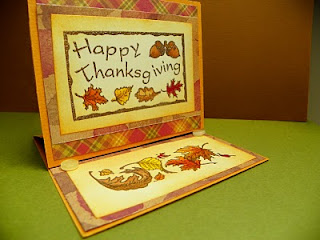 Here in the USA the schoolchildren are dragging themselves back to the classroom and getting back into the swing of reading, writing, and arithmetic.

In honor of their noble efforts,

your challenge this week is to use letters!

(you know, the A L P H A B E T)
.
.
*****
.
Jana here: I made a couple of cards this time around. I have been up to my eyeballs making inchies lately, so a card was a nice change. They are a much bigger canvas on which to work. I am currently working on some Halloween inchies, so I switched it up a bit and made a Halloween Card. It's very simple, but I like it.
.
. 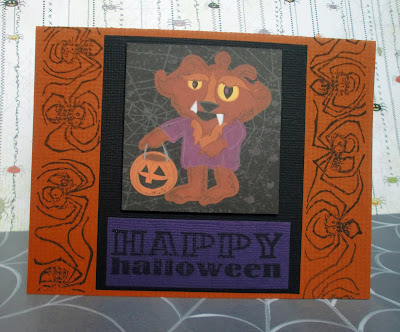 .
I also got a head start on my Christmas cards. I pulled my Christmas craft bin out and found this wonderful little stamp set that I got either last year or the year before. And the papers are leftover from an album I made last year.
The only thing new on here is the little pearl bling in the center of the snowflakes.
.
This doesn't say Merry Christmas, not because I don't say it, but rather because this card will likely not go out until January. I usually write out cards and they get put aside. I usually find them in January. Sooooo, this year I decided to head myself off at the pass, and just make them fit the season. IF by some miracle they actually get out in the mail before Christmas, I'll write MERRY CHRISTMAS on the inside of the card. Or stamp it.
.
. 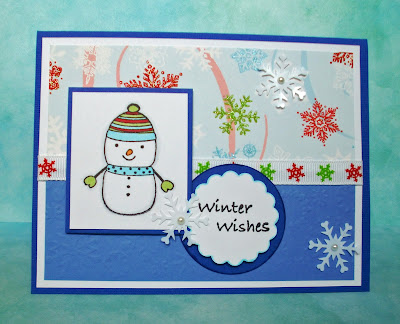 Rosemary here - I made two cards for this challenge, but I had so much fun, I have a feeling that I'm going back into the crafty lair for some more stamping and cardmaking.

First up is a Christmas card using a Hero Arts set that I've had but have only used sporadically. I'm definitely a person who sees a demo and thinks - Oh, I can do that and I can do this and blah blah blah and yes, add that to my cart and some of that and so on. Then I get home and hmmmm....and I become woefully craft-challenged. (SIGH) Yeah, it's like that!

But I finally got a little whoosh of creativity and ta-da!! (for more details head on over to my Fortress 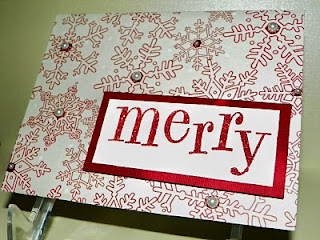 My second card is pretty nifty, if I say so myself, and puts a letter front and center.

I stamped and colored an antique map image and added a little relief map-ish touch (which looks better in person - don't you hate when people write that because it's like - hey, it looks fine but now you're making me question your ability.....)

I have always wanted to do this since being inspired by a Rubber Stamper magazine cover project (again, sigh sigh, how I miss that magazine but that's for another time)

Anyway, I used a brand new stamp "A" and embossed it (as I did the map image too) and then punched it out and antiqued it. Some layering on cardstock and again ta-da! 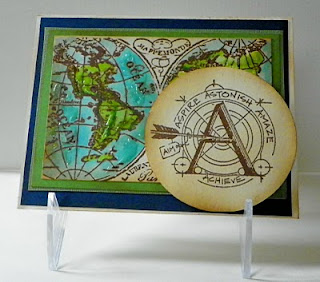 Join us in the LETTER fun this week and add your project to the BLOG HOP below...
Posted by Rosemary at 3:26 AM 8 comments:

Summer is un-officially over for most of the Northern Hemi-sphere. School has started, or will start this week. AND the Southern Hemi-sphere is just now getting into some warmer weather. So we are going to make a big deal of the passing of lazy days, and casual attire in the North and celebrate the arrival of warm weather in the South.

This weeks challenge is photo inspired. I (Jana) took this on a day trip to a local amusement park. My daughter challenged my husband. And she won! See that cute little blue critter right above the #5, it lives in my house now. 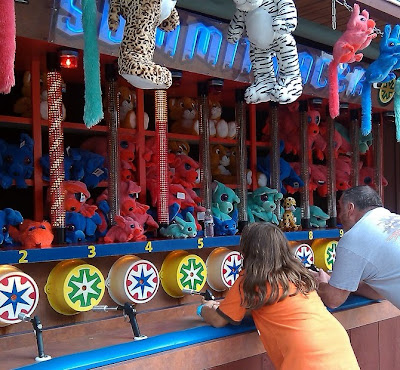 I love all the colors and the implication of action. It's a busy photo.
Rosemary here - I love this inspiration photo - it's got a wonderfully energetic and happy vibe - I mean, seriously, look at all that lovely color color color!
So, for my projects - which are all cards - I went with a little bit of everything that this photo represents to me - color, fair/amusement park atmosphere, and summer. 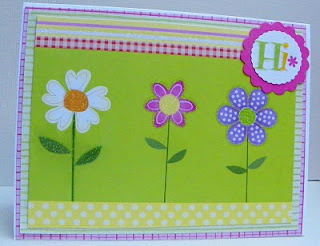 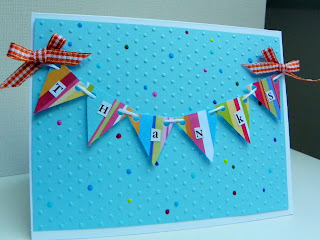 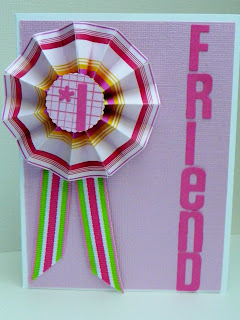 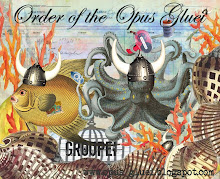 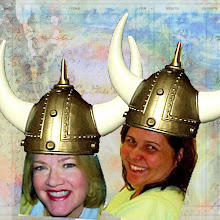 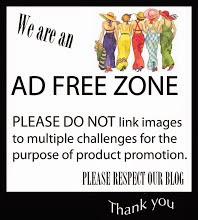 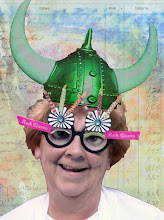 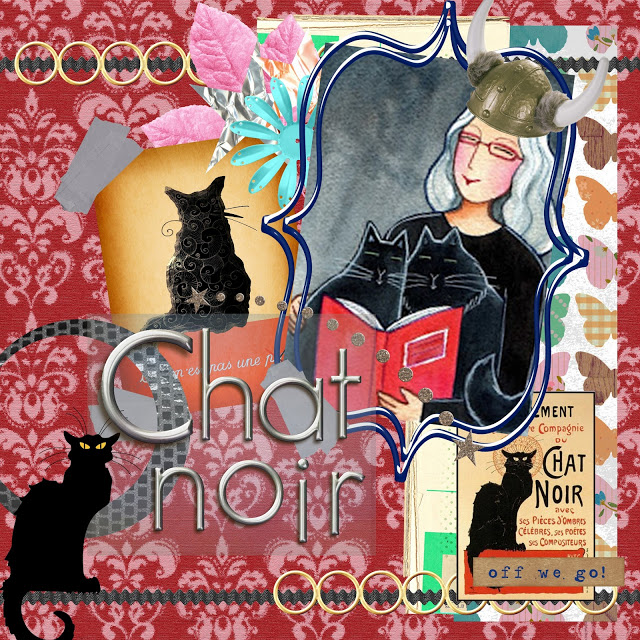